It seems the “History” channel, after having already broadcast one short series on the Money Pit in 2014, decided once was not enough and is running another series on the same subject. Different bat-time, but the same bat-channel and equally bad bat-material, with the usual parade of “theories” (read: “guesses”) and faux science. I guess they’ll just never learn.

All this activity has generated a lot of traffic on Critical Enquiry, as well as on our (admittedly tiny) YouTube channel. The two OI videos are being viewed, in all or part, by thousands of interested viewers. Comments are mixed, with the usual smattering of “nice job!” notes along with the usual “you don’t know what you’re talking about” blasts from the believer set. It’s to be expected, since so few viewers understand how badly distorted the history of the island and Money Pit has been by generations of treasure (and media) hounds.

During one conversation about the site, I dropped the following comment which probably sums things up more concisely than anything else that can be said. It’s all well and good to debate over whether a core drill really did go through 30 feet of “hand worked, puddled blue clay” while the pit was being plumbed yet again some years back (for the record this sounds like more wishful thinking along the lines of Dan Blankenship claiming to have seen “a severed hand” in the grainy CBC underwater video back in the 1960s) but this sort of debate is interminable and can never really be resolved, because none of the evidence actually can be reviewed by legitimate researchers.

But here you go, believers and skeptics. Chew this over, since it pretty much annihilates the whole concept that some huge underground working was created on the island.

As for recent findings, consider the following. If an excavation of the scale involved in creating the MP had actually occurred on the island, they wouldn’t find a few random coins (such can be found scattered along the whole North American East coast). Instead, they would find belt buckles, buttons, coins, broken tools, bits of clothing, remains of a huge pile of food remnants (animal skeletons, middens, etc.) from feeding the crew of workers who excavated the Pit, along with debris from excavating that 200′ hole. Add to this a massive amount of charcoal from cooking fires, along with huge brush piles from the trees cut and worked to produce all that cribbing. There would have been a HUGE clearing left over from the massive pile of soil and rock excavated during the operation, then put back in once the mythical treasure was placed. What happened to the windlasses, cranes, buckets, and other surface tools? Did these mythical crews clean the place so completely that it looked like near virgin wilderness when McGinnis & co. stumbled across it in 1795?

In other words, look at photos of the site during the period when Dunfield and others were digging. Take away the heavy excavation equipment, and that’s what the MP site would have looked like while the alleged treasure burial was underway. And sinking a shaft 200′ deep during that era was nearly impossible anyway, because they had no means of exhausting CO2 and other gases that would have killed diggers outright. 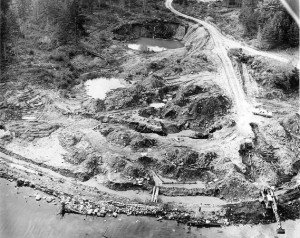 And I didn’t even mention the massive and well-filled privy shafts that should also have existed at the site for the relief of that huge crew of diggers, planners, supervisors, and others.

In other words, if this hoary old tale is for real, why are they finding so little evidence on the surface? The only reasonable explanation for this dearth of evidence is that nothing actually happened there in the first place.

The TV presenters crowed over having found a coin. A single coin! And, of course, that coin simply had to have been dropped by one of the men who helped dig the pit back before 1795…according to the believer mentality, there’s no way one of the many post-1795 treasure hounds, or a random visitor to the island could have dropped it. This is simply ridiculous, and the reason they need actual archaeologists to perform actual work.

Had someone with real training found that coin, they probably could have examined its context and determined roughly when it fell there. Instead, the TV guys destroyed another piece of evidence by extracting it without any context. But I forget myself — showing archaeologists painstakingly extracting artifacts isn’t good TV drama.

When will the believers realize that treasure companies spin one yarn after another, totally ignoring contradictory evidence while always putting the latest “discovery” in the best possible light to keep the cash and media attention flowing?

I suspect the answer is, of course, “never.”