“In the Year of Fourteen Ninety-Two…” begins the bit of doggerel that nearly every American schoolchild learns. That’s when “Columbus Sailed the Ocean Blue” and, some people still believe, discovered America. To this day I know people who entertain a vision of old Chris sloshing ashore (probably in Virginia) with a priest and Portuguese flag, claiming all the land in the name of Isabella.

Oh, the irony of it.

For several decades now, at least, it’s been well known that dear Chris was by no means the first European to set foot on this side of the Pond.  At the very least, we know that Vikings had a long term settlement at L’Anse Aux Meadows in Newfoundland in the 11th century, which puts paid to Chris’ claim of supremacy. In fact, Columbus never set foot on the North American continent — he only “found” the islands of the Caribbean, and very few of those. There, he set out to enslave the natives, torture them into revealing where their hidden gold mines (which didn’t exist) were located, and watch as 95% of the population died of European diseases against which they had no resistance. 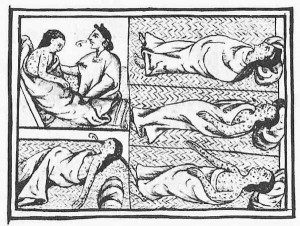 So why does the Columbus myth persist?

To a large degree, it’s because that’s what was taught in public schools for decades under the guise of “social studies”. I haven’t reviewed a recent grade-school text to see what’s currently being taught, but generations of Americans were victimized with the simplistic myth that “Columbus did it.” At best, he managed to popularize and open the New World to Europeans due to the publicity that surrounded his return to Portugal.

I’d also bet the same legions of school kids got the “Columbus’ sailors almost mutinied because they were afraid of falling off the edge of the Earth” myth, but that’s a story for another day.