On a fairly regular basis, email appears in my inbox asking about some Internet rumor or other that’s “going around” and whether I have any information on it. The same happens on Facebook, since most of my friends know I’ve been researching legends and folklore for a long time and generally have a good handle on these situations. As a result, and so readers can also be involved in the fun of dispelling loads of electronic horse-poo, I’m going to present a primer on how the process works.

First off, you have to take all your preconceptions and throw them out the door. It doesn’t matter how much you “want to believe” aliens are landing in Grover’s Mills, Obama is a closet Muslim, or some guy finally got photos of Sasquatch eating lunch in a Denny’s in Kalamazoo. You’re not Fox Mulder.

What we’re going to deal with are facts and evidence, not preconceptions and innuendo. If you want the latter two, just go watch Fox News and you’ll get all you can stomach. Or more.

Part One: let’s look at a rumor

Here’s a gem that arrived in my inbox a few days ago. I won’t reprint the (long) article since it’s entirely fact free. The title should suffice for our purposes.

The first red flag is the number of times the mail has been forwarded. This one had gone through at least a half dozen forwardings, indicating it was being passed around to a number of individuals in a “chain letter” fashion. This is almost never a good sign.

The mail contained a number of photos of a very posh-looking jail-like facility, with a modern design, beautiful rooms, and lush accommodations. Next, was the claim made by the author of the message.

This is pretty incendiary, isn’t it? It’s also obviously untrue, and the story has been “outed” as false by my buddies at Snopes for several years now (it is a jail but it’s not even in the US). In fact, this story first surfaced in 2008 and has been popping up for over five years. So, if that’s the case…why do the things keep circulating?

Part Two: There Are Suckers Born Every Nanosecond

The second indicator of a bogus rumor involves the message itself, and what evidence (if any) it presents to support its assertions. This one presents none. Zero. Zip. Nada. It’s a bunch of photos someone harvested from a website somewhere, used to make up a story slamming their least favorite politician, and sent off to a gullible population of Internet denizens. Then they sat back giggling, or maybe raking in lots of money for having acted as a paid political shark during the 2008 campaign.

Rule One: if there’s no evidence presented to back up an assertion, it’s only an assertion. It’s not real until someone presents the evidence.

The insidious thing about these rumors is that they all play into someone’s preexisting beliefs. Everyone has some level of what’s known as confirmation bias that colors their reaction to a piece of new material. If you already don’t like Obama for some reason, and receive this story, you’re not likely to look into the details or try to confirm it. You just accept it as another piece of evidence supporting your belief. It makes you feel better about having those beliefs. The fact that it’s an unsupported assertion is meaningless.

If you saw a claim that “Rick Santorum was sired by a space alien from Zeta Reticuli” on the cover of the Weekly World Drivel at your local supermarket counter, you’d probably laugh over it. You’d know it’s not possible, if for no other reason than that the aliens of Zeta Reticuli find human women really unattractive. But this claim is identical to the one about Obama and the jail facility — they’re both presented with no confirming evidence. No official memos showing Obama voting for the facility, no roll call about the event, and no medical tests showing alien DNA in Rick Santorum. But you believe one while rejecting the other.

“So,” I hear you say, “what about the messages I get that are actual news stories from an Internet site? I mean, these sites have a masthead, and articles, and they’re real newspapers so they must do some research. Aren’t these valid articles?”

Ah, Virginia, I’m sorry to have to break it to you like this, but many Internet “news” sites…really aren’t. They’re just fronts for political groups, or individuals who want to believe they’re performing some public service by publishing anything they like. Unlike those halcyon pre-Internet days when you had to own a printing press, set type by hand, and print things at a relatively high cost, today anyone with $10 and a free copy of a decent HTML editor can turn out a website that looks, acts, and smells almost like a real news source.

Here’s a handy tip for weeding these things out. If you receive an article with what sounds like an outrageous claim, take the following steps.

Here’s an example from a story claiming that a half dozen members of President Obama’s cabinet are covert “Muslim Brotherhood” members infiltrating the US government. The search term is the quoted phrase. Note the results (click on the image to maximize for easy reading). 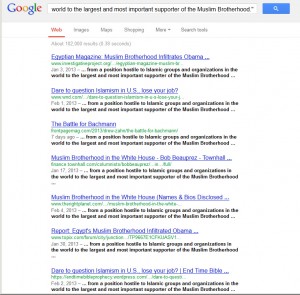 First warning: here we see lots of sites with the exact text from the search embedded verbatim in one of their own articles. Lots of fake “non-news” sites copy and paste from one another freely, unlike actual news sources that are prevented from doing so due to basic journalistic ethics.

The funny (sad) part of this one is that the author even admits that “The [original Egyptian] story is largely unsourced…” [italics mine]. This means the Egyptian story offered no evidence supporting its allegations. Yet the author of the story about the story apparently felt no compunction over repeating it. Hello? McFly? This is one innuendo-based story using another innuendo-based story to support itself. By now, your highly attuned “Danger, Will Robinson” BS detector should be starting to go off. If not, keep reading.

Second warning: none of the listed URLs are actual news sites. They’re all right-wing blogs, Bible-related sites, or other organizations with absolutely no requirement to publish factual material. They’re not bound by any ethical requirements and can more or less say anything they like. They’re the web’s equivalent to the “National Inquirer” and other scandal sheets. It’s your choice how much to trust whatever they publish.

Third warning: bad sites and authors use themselves and others like them as sources. So if you see that story Y is based on material originally published by site X, and site X is still some unsubstantiated blog or nameless organization, then the “facts” in story Y still can’t be trusted. Conspiracy theorists and fringe science groups tend toward internally referential material on a scarily consistent basis. They seem to think that if they quote one another (like real scientists and researchers do) it somehow lends legitimacy to their nonsense. But zero times zero is still…yes, you guessed it, zero.

While you should never, ever judge material solely on the basis of its source, it’s a good idea to check sources in order to determine whether bias should be suspected. For example, a news article extolling the virtues of tobacco consumption that happens to have been written by or for a cigarette manufacturer should always be treated with suspicion. Likewise, stories about climate change fears being overblown are just slightly worthy of concern in terms of objectivity if they originate from the oil industry.

Google the author (if known) of the article or claim in question. If said author happens to be associated with a number of right- or left-wing groups (in the case of a political claim), a pro-business group (if climate science or consumer safety issue is involved), their claims should probably be taken with a huge grain of salt unless they can back them up with actual evidence from independent sources (also see the warning about internally referential material, below).

It’s also a good idea to research the actual website to see if you can figure out who actually owns it. This requires a bit of techie skill, but the process boils down to this:

In the case of the “Muslim Brotherhood” article, a trace of the publisher (www.investigativeproject.org) turned up an IP address of 64.64.0.155. Entering this into a Whois query turned up a company called “Media Skillz” located in Hilton Head, NC. A Google search for “media skillz” Hilton Head turned up absolutely nothing but the name of the so-called company. The actual owner is totally unknown. Why trust material published by persons unknown, especially if written by people who generally write for potentially biased organizations? Again, such groups have no requirement to publish accurate material and can say what they like.

A lie can run around the world before the truth has got its boots on.

The lesson here is pretty easy, but it’s hard to accept that a source is invalid or suspect if a particularly juicy piece of chain-mail produced by it just happens to fit with one of your preexisting beliefs.

Bigfoot followers will immediately light up over any alleged new “revelation” that might confirm their belief in the creature.

Politically polarized individuals desperately want to believe their opponents are evil, twisted, baby-killing Nazis and are sure to pass along any story that seems to confirm this opinion.

Someone who wants to disbelieve that climate change is real, or that it’s a plot by Birkenstock-wearing hippies to take V8 engines away from God-fearing Americans, will pounce on material that seems to confirm that belief.

You get the picture.

The Internet will be a happier place. Your friends will receive less junk mail. Your blood pressure (and theirs) might remain a bit lower. And we’ll all be a little bit smarter.