In 2002, I received a contact email from a gentleman in Connecticut regarding my work at Oak Island. He was appreciative of my efforts at demystifying the Money Pit tale, and we kicked off a lively correspondence about history, mythology, and folklore.

He was very interested when he found out my father had trained as an aviator at Yale University during World War II prior to being shipped to Burma. Turned out he was a Yale grad, which elicited lots of ribbing since I worked for that “other” university in Massachusetts. I also informed him my wife was an Connecticut Air Guard officer, which he thought was wonderful. He then revealed he was a retired Air Force Colonel, World War II veteran, and was living in a retirement community near New Haven.

A few days later I received the following email:

On our next trip, in 2004, we stopped by (she in full Class A, me in a suit).  Edward was extremely happy about this, and greeted us both with a warm hug.  I think he also enjoyed the attention his ‘VIP’ guests elicited among other residents.  I have a few photos from the event, but was unable to locate them since they’re stored in the archives somewhere.

We enjoyed a “not ungood Institutional” lunch in the main dining area, and he presented my wife with his original set of gold oak Major’s leaves “for her hope chest.” 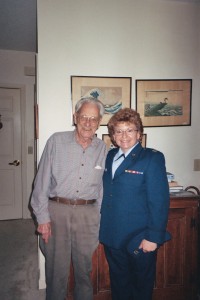 During our chat, he told us a number of stories about his service and some of the adventures he experienced. I tried to remember them all, and wrote up as much as I could recall a week or so later. I emailed the document to him, which elicited a response of “I didn’t know I was being interviewed!” While I’d gotten most details right, he added and corrected some elements and sent back a final copy.

I decided to enlist just a little while after Pearl Harbor. I’d been working as a newsman, a reporter, and was in the office when the Japanese attacked; we were all scrambling around trying to find out what was going on, and I remember this one Japanese reporter, a really nice fella who always wore a suit, who worked for one of their news agencies but came to our offices a lot. He was walking around as we were piecing together what had happened, and he had tears running down his face. He kept saying “this is the end of my country” and was crying like crazy. We felt really sorry for him; I never did know what finally happened to that guy.

A month or so later I went home after working nearly 24 hours straight, and the boss [Edward’s wife] came in, looked at me, and said “go sign up. You know you want to, you’re driving us all crazy here, and you should just do it. The babies and I will be fine.” So I went and signed up.

The recruiters asked what I’d done in civilian life and were very interested when I told them I was a newsman. They said they had the perfect place for me to work, at a building in New York City where a lot of secret work was being done. It was all very hush-hush and they just gave me an address, saying it was a secret location. So they gave me orders and off I went; when I got there I immediately knew which building to go to because, although it was just a normal office building, it was the only one around with lots of Army staff cars parked in front and lots of guys in uniform going in and out. So that was pretty easy.

We started moving toward [location?] and arrived at our airfield. That first night, someone in the squadron — I don’t know who — turned on the radio and was tuning it around to see what he could pick up. Totally by accident he ran into Radio Berlin, and we heard a show broadcast by a guy who was known as “Lord Haw-Haw” by the British. He had a very high, upper-class English accent and we listened to the show, which we probably weren’t supposed to do, for quite a while. Then suddenly he said “and I’d like to offer a special welcome message to the members of the 356th fighter squadron, recently arrived from America and now stationed at [location?]. I’d especially like to welcome their commander, Col. Lowell, and the rest of his officers.” (“Domey” Lowell, of the well-known Lowell family, was the squadron commander.)

Lord Haw-Haw then named several of the higher-ranking guys in our squadron, and went on to say that “some of my friends are arranging a visit to welcome you to your new home, and you’ll be hearing from them very soon.”

The next night the Germans came over and bombed our airfield. It wasn’t a big raid, and some of the guys just stayed in the huts rather than go to the air raid shelters. “Domey” Lowell was one of them, and as he sat at a desk in his hut a bomb came down the chimney. It didn’t explode but it threw some stuff across the room, and a bit of it hit him on the right hand and injured him a bit. He put a bandage on it and didn’t think much else about it until later.

A few days after the raid, a general showed up and had everyone get in formation. He then proceeded to call “Domey” Lowell up and started presenting him with a Purple Heart — the first one awarded to anyone in the squadron. Domey walked up to the general and, really embarrassed, said “sir I can’t accept that, this is all that happened (showing him the cut on his hand) and I really don’t deserve a Purple Heart for it.”

The general leaned forward and said “take it!” So that was that; Domey got the first wound in the whole squadron and the first Purple Heart to go with it.

During the raid, one of the German planes was shot down near the base. It was a JU-188; the “188” was peculiar since it was the first time anyone had heard of one of these models, so the boys from intelligence wanted a look at it and also wanted to grill one of the flyers who’d survived and been captured. We had this guy in a hut when a Major from the British intelligence group arrived; the Major went into the hut, and a little while later he came into our offices and was just absolutely livid. He demanded to know who’d given that German a cigarette! One of our guys had just done it without really thinking about it, and didn’t see what the problem was.

The Major explained that you never wanted to let a prisoner relax until they’d been grilled — you wanted them off-balance and scared, not knowing what to expect, so they’d talk. Giving this guy a cigarette was a way of letting him get comfortable before anyone had gotten any information from him. So we didn’t do that very well, and the Major was really angry.

Later they put me through a course with the British, learning how to do evasion and escape so I could teach it to the pilots in our squadron. Some of the guys did what they were told, others didn’t. Sometimes it worked, sometimes they got caught.

I’ll never forget this one guy, shot down in France, who did everything wrong and still made it home. After his parachute landed he looked around and saw the tower in a big chateau nearby. We always told the guys not to go near places like that and to avoid large buildings because the Germans used them. This guy sneaked in fairly close to the chateau, heard guys speaking in German, and decided to lie low until nightfall. Then he sneaked into the motor pool, looked around until he found the biggest motorcycle they had, then rolled it down the hill until he was well away from the buildings. Then he kick-started it and rode like hell, right down the middle of the main North/South highway through France. Along the way he stole and begged for food and somehow got petrol for the motorcycle as well. Finally he got to the Spanish border, found a friendly young lady who was willing to help, and sneaked across.

When I saw him in England a few weeks later, he grinned and said “hey Captain, those German motorcycles are really fast!”

We exchanged emails and holiday greetings with Edward for several years. Then, one holiday season I received a letter from his son — also a retired Colonel living in Maine.

This blog post is in his honor, and to help preserve the memories of World War II veterans like him and my own Dad, who are leaving us at an increasingly rapid rate.